In the Community: Ellen and Gayane's Volunteer Day

Gayane from our Burbank center and Ellen from our Anaheim center met at the Long Beach Airport on Saturday, August 18, 2018, to volunteer for the Special Olympics of Southern California's 13th Annual Plane Pull! 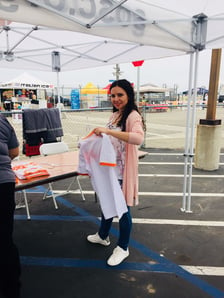 They were part of the set-up crew, and while it was still dark outside, Ellen started off by setting up pop-up tents for the various sponsors of the events. Together, Gayane and Ellen unloaded and set-up tables and chairs, LOTS of tables and chairs, to be used for the sponsors and BBQ lunch. Gayane helped unpack and organize the merchandise booth, keeping an eye out for late-arriving sponsors, while Ellen helped direct participants for the Law Enforcement Torch Run. They both helped ensure the snacks (cookies and cupcakes) were set-up in the lunch area. At the end of their shift, they stayed to watch and cheer on the first couple of teams to pull the 757 FedEx Plane. 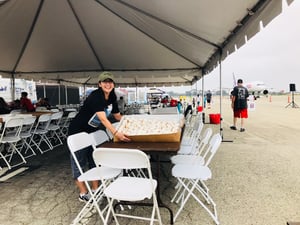 Unlike the Seasonal Olympic Games or Regional Events, where the participants are the athletes themselves, the Plane Pull is a fund-raising event, where different teams (law enforcement, fire departments, corporations, organizations, fitness groups, financial institutions) compete to raise the most money, in hopes of securing a prime "pull" time slot. The goal is to see which team can pull a 124,000-pound 757 FedEx Plane the fastest. There was one SOSC Athlete Team, and some teams had an "honorary co-pilot" SOSC athlete on their team. This event raised almost $190,000 for the Special Olympics, which to date, is the largest amount raised in the Plane Pull event.  Gayane and Ellen challenge NHLG to put together a team for the 2019 Plane Pull next August! 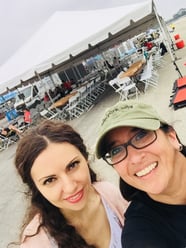