In the Community: Cheraya Volunteers at Habitat for Humanity ReStore

The Burbank center's own Cheraya Williams recently gave of her time at her local Habitat for Humanity ReStore.  Click to read more! 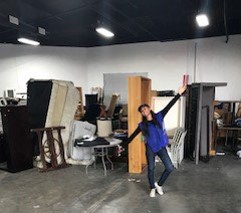 This was Cheraya's first volunteer day for the company so she chose Habitat of Humanity Restore. After reading what her colleagues had done, she knew what to expect (even though every store is a little different).  She helped organize the paintings in the front of the store and of course put them all in height order!  She also helped with pricing before the items were restocked. They did say to mark the price whatever she would have paid for it, which she said was hard because she would love to find a couch for $50!  She says she's sure people will find some diamonds in the rough.  There was also a whole section of just free items for people to take which were still really decent.  Cheraya even found the perfect chair that should have been at least $100, so she'll definitely be going back.