That is the first selfie I've ever taken. We've come a long way in technology from when I was my kids' age. I remember one of my first jobs was for the City of Anaheim through the Junior Training Partnership Act (JTPA). One summer in high school I worked at City Hall for the Fire Authority, and the next summer I worked for the Housing Department for City of Anaheim. This was not only my first exposure to working in government, but it also got me really interested in working with computers. (Of course I was introduced to computers in elementary, but this was something beyond playing Oregon Trail!)

After high school, I had a few setbacks, but I got back on track when I attended a learning center, similar to New Horizons. I paid my own money to learn Microsoft Office, Windows NT, Netware, A+. I then set out to start my career as an IT professional. 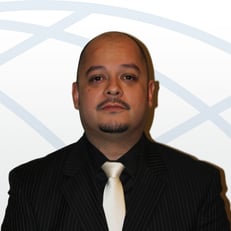 Growing up in Orange County I was aware of the bankruptcy in 1994 and them being able to bounce back. Not only the County, but the State as a whole. I’ve seen what it means to be lean within the government sector. Unfortunately, many times the business sector leads the way with being more optimal with their resources and streamlining processes. Having worked in depth with both sectors I am able to tell my partners in government: here’s how it’s being done in the private sector you might want to consider this. This way I position myself is as an advisor and that’s a good thing for everyone.

In this post-recession era, people are still concerned about optimizing what they have. Doing more with less. I think people are more open to discussing concepts that are going to allow them to reduce stress and increase productivity. For this reason I see Lean Six Sigma being a very popular course with businesses in the area. I’ve seen service companies implementing Lean Six Sigma. Insurance companies such as Word & Brown and Mercury Insurance that have Lean Six Sigma departments. I think everyone that worked through the recession understands the importance of this. As long as it doesn’t compromise quality, it makes sense.

There are certain principles that I follow that increase my productivity and I love to share with clients. For example, reading emails. There shouldn’t be a reason that you have to re-read an email. Take the time to read, comprehend and act on the email the first time and there’s no need to go back to it. I don’t touch an email unless I plan to be able to do something with it. Also, keyboard shortcuts. By cutting the 2 seconds per email it takes me to go to my mouse, I can save up to 5 minutes a day or 25 minutes a week. I’ve showed in the video below how I’m able to do that.

Personally, I’d like to be financially independent in within the next 5-10 years. Who wouldn’t want that? Now, I believe the way I’m going to make that happen is through my professional goal here at New Horizons. That is to build trust and a relationship with you here in Southern California. I want to be the person that you can count on for advice, recommendations, and solutions. I want to be someone that you can hold accountable.

Instead of spending my kids’ college fund on a 3-day trip to Disneyland, I prefer to spend quality time with my family at home, playing catch, etc. I am a fan of all the California sports teams and appreciate what they do to build character. In football I have to choose the Raiders. And it may be hard to believe but I really am a fan of both the Dodgers and Angels having been born in LA, but raised in Orange County.

Other posts by Eddie Gonzalez