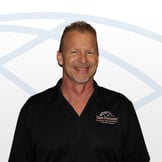 "Sure I'll come to Tucson to help you out for a bit." That's what I told my brother's in-laws when they opened up New Horizons in Tucson June of 1997. Twenty years later, three kids, and a great career at New Horizons, I don't think I'm considered a Californian anymore. Not only did I help write the prospectus and was a part of the process to get investors to open the new center, but I came out to assist with sales. I never would have thought I'd connect with so many great people out here over the years, but I've got some great stories...

I challenge everybody. I can take a home grown Excel person, someone who's using a Microsoft application and put them through Part 1, 2, & 3 classes and I'll cut the time they use the application in half because of increased productivity. I think the assumption is that because these Microsoft applications have been out for 20+ years that everyone should know them, but I still learn something new all the time. Everybody's got to do more with less. The typical IT person is googling answers to problems many of the times. If I can embed that knowledge in their head, that makes them twice as productive.

I've especially grown fond of the airmen in the area. These are young kids putting themselves in harm's way. Many of them don't have someone to look up to outside of their direct superiors. If I can advise them, give them the suggestions of the steps to take to work hard and possibly get a $100k job, I feel that helps out a lot.

Many companies are coming to Tucson and my goal over the next few years is to help them retain smart people. I want to be an incubator of the skilled work force. About 2/3 of the jobs are imported from outside of Tucson. I would like to help show these companies that we have a highly skilled work force here and that with training they can develop local talent to flourish.

I love to get out and go hiking, hunting, and fishing when I can. I'm a geriatric parent, so my kids keep me more active than I probably would be at my age. White mountain and hiking in the Catalinas are the go-to's. And of course anytime the Denver Broncos are playing is a good time.

Other posts by Dan Curran