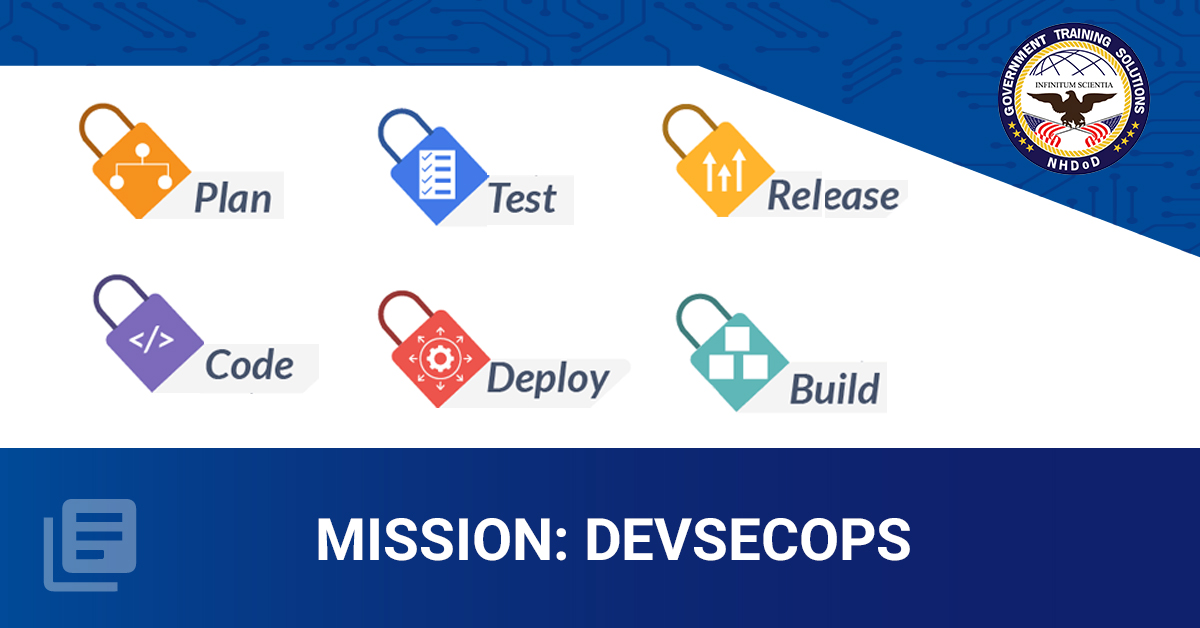 DevSecOps is a set of software development practices on a mission that combines software development (Dev), security (Sec), and information technology operations (Ops) to secure the outcome and shorten the development lifecycle. The DevSecOps Mission is to develop a Continuous Monitoring (CM) approach for all Department of Defense (DoD) mission partners that monitors and provides compliance enforcement of containerized applications which cover all the DevSecOps pillars (Develop, Build, Test, Release & Deploy, and Runtime) for a secure posture with the focus being on automation and integration going forward. Here's how this breaks down.

DevSecOps is a set of repeatable software development practices that combine software development (Dev), security (Sec), and operations (Ops) to shorten the development life cycle and deliver a secure product. Security practices are implemented within DevOps at both the Dev and the Ops phases and is not a separate phase in and of itself. By implementing a DevSecOps process, developers can now deliver software features, patches, and fixes more quickly to users because the process can be automated and repeatable.

Development is the phase in which development of the application is performed. This phase is typically broken into five categories: Coding, Building, Testing, Securing, and Publishing. These categories may have other names or be merged to become one category, but the same general tasks will exist within this phase. During development, any category can cause a return to a previous category.'

During the build stage of the Iron Bank pipeline, it is necessary to control the inclusion of dependencies. Iron Bank can control the dependencies through the type of commands in the build files and the use of trusted sources. Though the dependencies come from trusted sources, they are run through Clam AntiVirus (AV) to check for viruses and malware. Once the dependencies are determined to be secure, they are moved to the artifact repository and there is no need to reach outside the Iron Bank infrastructure for the build of the container image. After the build completes, the new image is pushed to the artifact repository. UNCLASSIFIED Container Image and Deployment Guide, V2 R0.6 DISA 02 November 2020 Developed

The Iron Bank pipeline is tailored for building hardened containers without having any awareness or concern for the type (i.e., java, python) of build being performed, so many of the steps in the build process reflect its general purpose.

Iron Bank continuously monitors the Iron Bank repository using a Sidecar Container Security Stack (SCSS). Monitoring can perform continuous scans of the Iron Bank repository and in a production environment where container images are instantiated; the executing services and infrastructure can also be scanned. Performing continuous scans of the repository and running services allows new vulnerabilities or security risks to be quickly detected and addressed. Once addressed, new builds can be initiated with the goal of quickly releasing new secure container images.

The operations phase consists of categories that take place in production to keep the application available and secure. Operations is usually broken into three categories: Releasing, Configuring, and Monitoring. If during any of these phases a security issue is found or a threshold is met during monitoring, a fix can be requested. Because configuration management in the coding category during development is the single source of truth, changes implemented trigger a new pipeline to execute pushing upgrades automatically into production.

How Do You Make a DevSecOps Pipeline?

To implement a sustainable and repeatable DevSecOps process, organizations will implement a pipeline in which DevSecOps steps are applied through code in tools such as Jenkins, Bamboo, or GitLab etc. with continuous integration and continuous delivery or continuous deployment (CI/CD). To fulfill tasks the pipeline cannot perform itself, external tools are called and executed from within the pipeline process. The process can better be understood by breaking a production pipeline into its pieces.

While this pipeline is used to verify and release hardened container images, the practices implemented would also apply to pipelines building software for release.

The eight areas of specialization for cybersecurity are:

Secure DevOps is the hands-on team that actually manages systems in the data center (or cloud). They securely install, configure, and operate systems and software—especially dedicated security products such as firewalls, intrusion detection, and even dedicated HSMs (Hardware Security Modules) to hold sensitive keys and certificates. Often, the team is called DevSecOps to signify that “security is in the middle.” Even in a cloud environment, they still need to manage security processes and functions securely.

Just as DevOps is a cultural shift, so too is DevSecOps, one that starts with championing the inclusion of cybersecurity team members, processes, and controls in the agile planning and project management process. Understanding that security can also be automated via CI/CD should address any concerns that introducing security upstream will impede agility. There is a military training course available for DevSecOps to educate soldiers and government contractors on gaining a solid understanding of the leadership requirements for successful DevOps adoption at both the tactical and strategic levels for those who help design, influence, implement and motivate the cultural transformation. Click here to view DevSecOps Foundation outline.

The configurations and practices within this guide are meant to show what is needed to have a secure container through the complete lifecycle. Some of the guidance is measurable and can be checked by tools before a container image is instantiated within a production environment or while the container is executing, and other guidance is non-measurable but should be followed to reduce accidental security flaws from being introduced into the container lifecycle. This document does not address the host operating systems, pipeline, and security tools, the container platform, or any other services offered by the container platform. These services need to be secured through the appropriate STIG, SRG, or best practice guidance to have a fully secure environment.