JOINT ALL-DOMAIN COMMAND AND CONTROL IS THE FUTURE OF DEFENSE 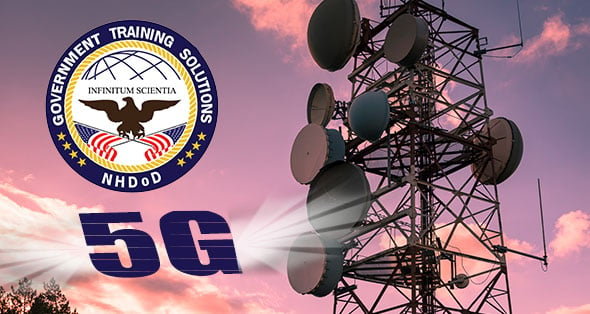 The Pentagon is working closely with industry and interagency partners on the development of it's DoD 5G strategy that will provide lightning fast ubiquitous connectivity. JADC2 (Joint All-Domain Command and Control), enabled by 5G connectivity, will allow the military to exchange and synchronize information across systems, services and platforms seamlessly across all domains including air, sea, land, space and cyber. The development of a joint warfighting concept and doctrine that will drive the Defense Department’s transition to all-domain operations.

Where Is 5G Used in the Military?

The Pentagon's top official remarked that the development of 5G technology will be key to the Defense Department’s vision for JADC2. The term 5G refers to the oncoming fifth generation of wireless networks and technologies that will yield a major improvement in data speed, volume and latency over today’s fourth-generation networks, known as 4G. 5G networks are expected to be up to 20 times as fast. This technology can enhance something as simple as virtual reality training or as ambitious as the connectivity of systems for JADC2.

5G in the Air Force

Much like with the hypersonic missile, the Air Force is one of the first spearheading 5G technology and JADC2 military modernization through its Advanced Battle Management System effort, which is charged with creating an "internet of things" for the military. The Air Force is leading the way with a number of different 5G experiments that will assess spectrum sharing, improve aircraft mission readiness and enable air, space and cyberspace lethality. Several Air Force bases are conducting 5G prototyping, experimentation and testing efforts. Over the summer the Pentagon announced a second tranche of military installations that will host the testing including Tinker Air Force Base in Oklahoma. The first tranche of bases included Hill Air Force Base in Utah, and Nellis Air Force Base in Nevada.

Tinker Air Force Base would focus on bi-directional spectrum sharing between DoD and commercial communications, which is of great interest to the military as well as the private sector. As 5G technology is rolled out, the Pentagon plans to pursue what it calls dynamic spectrum sharing between the military and industry, especially as it relates to the mid-band part of the electromagnetic spectrum that the Defense Department uses for radars and other systems. Portions of the mid-band are considered more advantageous for 5G because the frequency enables more bandwidth and greater range. Over the past few months, the DoD spectrum strategy team has been hard at work developing a mid-band sharing solution that facilitates 5G development in the private sector while also allowing the Pentagon to use that spectrum to meet national DoD cybersecurity policy and requirements.

The National Training Center at Fort Irwin and Camp Pendleton in California and Fort Hood, Texas will test wireless connectivity. Requests for proposals are expected to come this summer with plans to stand up the new test sites this fall for 5G. The experiments, now across 12 sites, are on a three to four year timeline but capabilities that could theoretically be handed off could emerge around the two-year mark.

Looking across all domains, what's pervasive throughout all of them is basically that control and dominance of the electromagnetic spectrum is really required. Satellites are just space junk without control of the spectrum. If you don't have command and control and communications, and proper comms with them, becoming useless. Contested environments also posed challenges for a spectrum based operations and was a major issue during the Iraq and Afghanistan Wars where an effort to jam signals to prevent improvised explosive device casualties also halted the U.S. military's communications.

Unable to communicate across the services and talk across industry. The solution was putting in the field these jammers that stopped the bombs from detonating, but they also prevented us from communicating because they were all working within the same frequency. The issue was operating within the same portion of the spectrum without interfering with each other. It is imperative to figure out in the not-too-distant future because there just isn't that much of the spectrum available, and the more and more people that jump in on it, the more congested it is, and the more difficult it is to work within it. We will all end up interfering with each other.

5G is a move towards ubiquitous connectivity especially as DoD's need for wireless access increases. It's reliant on spectrum raises one major question: How do we share the airwaves with 5G and 6G and 7G and what's coming. The DoD is reviewing plans to build its own 5G network wanting to explore different ways to share spectrum frequencies reserved for military and civilian use with commercial entities, including owning and operating a 5G network.

The DoD is looking to industry for ideas on how it can implement dynamic spectrum sharing that it would support 5G development and deployment for military and commercial users within the same frequency bands. DoD's partnership with industry is imperative in this extremely technical and competitive field and put out a statement announcing the RFI. What we learn in this effort has potential to benefit the entire nation and keep the U.S. as the global leader of 5G technology for many years to come. The RFI comes as the Defense Department expands 5G testing and follows a recent spectrum sharing deal to fuel higher capacity 5G networks that affect shipboard and ground- based radar, some weapons guidance, and safety systems.

Why is 5G a national security issue?

There have been national security concerns and operational concerns around 5G and spectrum use, particularly how commercial use of adjacent frequencies could interfere with DoD GPS systems. While DoD is looking to drive development and adoption of 5G for military purposes, it has fiercely defended its own spectrum holdings from what it sees as encroachment from commercial providers.

Top defense officials along with the Senate Armed Services Committee, National Telecommunications Information Administration, and the Commerce Department, condemned and called for the Federal Communications Commission to reverse its decision to let wireless provider, Ligado Networks, use a low-power terrestrial nationwide 5G network in the L-Band -- which is adjacent to bands used by the Global Positioning System. 5G raises many of the same concerns with security as the JEDI cloud.

The Defense Department has an EMS strategy that was put in place in 2013. But a lot has changed in seven years, between the explosion of the internet of things and efforts by telecoms to amass spectrum for 5G services. In recent years, DoD has been working with civilian side telecommunications regulators and Congress to develop ways to relocate spectrum activities from commercially desirable swathes of spectrum or share spectrum with other users while taking into account baseline military needs such as satellite communications, air traffic control and other capabilities such as electronic warfare operations.

There are already a few military training courses available to educate soldiers and government contractors how to manage Internet of Things devices and security.

This program will validate that the candidate has the knowledge, skills, and abilities to secure network environments for IoT devices, analyze vulnerabilities and determine reasonable controls against threats, and effectively monitor IoT devices and respond to incidents.

In this course, you will learn general strategies for planning, designing, developing, implementing, and maintaining an IoT system through various case studies and by assembling and configuring an IoT device to work in a sensor network. You will create an IoT device based on an ESP8266 microcontroller, implementing various common IoT features, such as analog and digital sensors, a web-based interface, MQTT messaging, and data encryption.